Hie Shrine was designated as a First Class Government Shrine before the Second World War, and was a highly respected place of worship for the people of Tokyo.

The deity enshrined is Oyamakui-no-kami, the god of Mount Hie in Shiga prefecture. This deity is more commonly known as Hie-no-kami. Hie Shrine derives its name from this deity.

Since the Heian Period, many branch shrines of the Hie Shrine in Shiga prefecture were built throughout Japan.

The history of this Hie Shrine goes back to the beginning of the Kamakura Period when a man named Edo built a Hie Shrine for the guardian deity of his residence on grounds of the present Imperial Palace.

In 1478, Ota Dokan constructed Edo Castle on the site of the present Imperial Palace. He also erected a Sanno-Hie Shrine in the compound for a guardian deity of the castle.

The Shogun Ieyasu Tokugawa began ruling Japan from Edo Castle. He also became a patron of the Hie Shrine and worshipped the deity as the protector of Edo, the old name for Tokyo. The citizens of Edo also had the strongest faith in Hie Shrine, which enshrined the guardian deity of the Shogun.

In 1607, the shrine was moved outside of Edo Castle to Hayabusa-cho, near the present Kokuritsu Gekijo National Theatre. This allowed the citizens of Edo to visit and worship at the shrine. In 1657, Hie Shrine and much of Edo was destroyed by fire. However, in 1659, Shogun Ietsuna Tokugawa rebuilt the shrine at its present location.

The shrine buildings were constructed in the Gongen-Zukuri style with vermilion-lacquered finishings. The Gongen Zukuri style consists of a complex roof system in which the Haiden hall of worship and Honden inner sanctuary are connected. The Heiden offering hall, Haiden hall of worship, Honden inner sanctuary and Roumon gate were so magnificent that they were authorized as National Treasures.

The Sanno Festival is held annually around June 15.

In the Edo Period (1603-1867), the Tokugawa Shogun were pleased to honor the Sanno Festival with their presence because Hie Shrine housed the guardian deity of Edo. Three sacred palanquins, carrying three gods, entered the grounds of Edo Castle on festival days.

The procession consisted of 45 festival floats, with the three sacred palanquins taking the lead. The procession was followed by singers and dancers and was reputedly one of the best festivals in Tokyo. Sadly, the tall festival floats have not been able to travel the streets of Tokyo since 1885 due to street overpasses.

These days, the Jinko Festival is held every two years. The festival procession now consists of three portable shrines and hundreds of parishioners. It is customary for the festival procession to pass the Imperial Palace. The chief priest and a representative of the parishioners enter the Imperial Palace to offer their prayers for the peace, happiness, and prosperity of the imperial family. Hie Shrine is the only shrine in Japan honored with this privilege.

Wedding ceremonies are also conducted at Hie Shrine. The ceremony is conducted solemnly according Shinto rites. 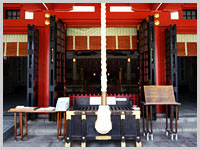 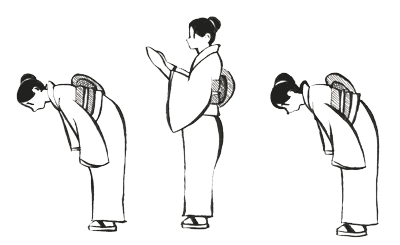 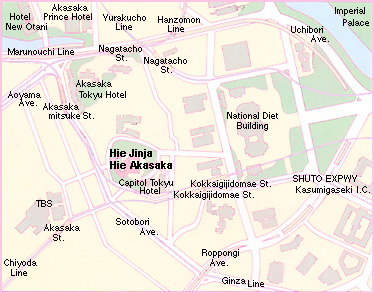